MICHAEL JACKSON: THE COLOUR OF MUSIC FADES INTO HISTORY 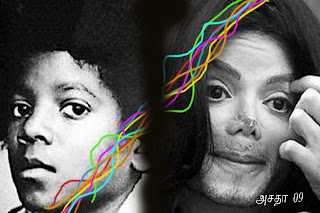 The news of Michael Jackson’s sudden demise made this morning so gloomy to me and I tried hard to hold back tears as his images were flashed on the television. Years back when I first heard a MJ song I mistook his for a female’s voice. It was husky and vulnerable. The lyrics really didn’t get me anything. Soon I knew that I could never be a part of the multitude known as MJ fans. But MJ’s life and his persona were of endless intrigue to me. Why ‘The King of Pop’ preferred to sport a Caucasian face hiding his own African one?

As Jon Pareles writes in ‘The New York Times’ the Caucasian face he achieved through
painstaking surgeries just remained to be a mask to him. Perhaps he wished to hide behind this mask. May be he tried to hide the pain of being faceless. It could be a misjudgment on the part of MJ to have concluded that music alone cannot be a thing to transcend race, religion, cast and colour. If that was a folly, I think he deserved to afford to it. The follies of extraordinary genius’ have poetic justice embedded in them and they remain in a territory where common sense is absurdity.

Some years ago when I was going through a book review in the TLS I learnt how the African people tried to straighten their usually coiled hair. They try from clips to heated iron bars to straighten their hair but with little or no success. MJ went just a bit ahead. If colour was the thing that haunted him so much one might have told him that he is just of the colour of music- practically colourless, and raceless, religionless too. True to a extraordinary genius he got himself entangled in controversies, fought legal battles, allegedly owes his death to overdose of prescribed medicines (Oh, Elvis!), finally he has left behind the legacy of popular music that enthralled millions along with debits to the tune of 1,800 million dollars.

May his soul rest in peace.
Posted by Asadha at 22:37 No comments: